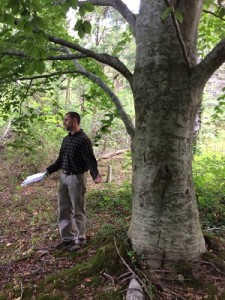 On Tuesday, September 15, Kris Ramsay, OCT Director, led a walk at the Mill Pond Valley Conservation Area. During his introduction Kris explained that in 1975 Orin Tovrov placed a  Conservation Restriction over the 12 acre parcel, which is made up of an upland valley to coastal shore, with freshwater ponds and wetlands. To ensure its permanent protection, 21 years Orin’s children donated the entire property outright to OCT, guaranteeing its permanent protection.

Kris went on to explain that while all land gifts are greatly appreciated, this land gift was particularly special because Orin was the originator and founding President of the Orleans Conservation Trust. While Orin unfortunately died young at the age of 69, he had a fruitful professional career in radio and television. In fact, Orin’s most successful and well-known soap opera was “Ma Perkins” which he started writing in the last 1930’s, continuing it until 1961. Orin was also the holder of three battle stars, the United States Air Medal, and was one of the first Americans to fly over Japan to drop off supplies to Americans after World War II.

Locally Orin held office as a member of the Orleans School Committee and as a member of the Nauset Regional School Committee. He taught English at Orleans High School and was secretary of the Snow Library Building Committee after the fire of 1952. On top of all this, Orin was, of course, a large advocate for land preservation. Orin went so far as to “challenge” other property owners to donate their land. One family in particular was the Moore’s, whom ended up donating more than 25 acres to the Trust surrounding Ice House Pond.

With this information “in hand”  the hikers were ready to traverse the trail and see for themselves why Orin thought this land was so special and needed to be preserved. As the group entered the conservation area the first thing that strikes all that visit the parcel is the English (European) Ivy that dominates both the understory and tree canopy. Kris explained that the ivy is a species of flowering plant native to most of Europe and western Asia. This rampant, clinging evergreen vine is a familiar sight all across town in gardens, waste spaces, on house walls, and tree trunks. Kris noted that like other exotic species, the ivy has predominantly been spread to areas by human and bird action.

Forging ahead, hikers passed a number of small wetlands, which eventually led to Duck Pond. Kris explained that Duck Pond, while not designed by the State as one, is best described as a Coastal Plain Pond. The Coastal Plain Ponds of Cape Cod are mostly deep ponds formed during the last Ice Age by large chunks of ice breaking off the retreating glaciers and causing depressions in the ground called “kettle holes.” If the hole was deep enough to reach the water table, then the hole filled with water and became a kettle pond. 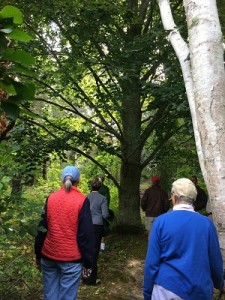 Seasonal changes in groundwater level are mirrored by changes in the level of these ponds. The fluctuating water levels alternately flood and expose the shore, and this determines the plant types that can live in these habitats. As the hikers could see, a rich diversity of wildflowers, grasses, sedges, and rushes inhabit these shorelines, with small, sheltered ponds, and sand/peat soil mixtures having higher diversity.

Kris added that global distribution of coastal plain ponds is extremely limited, and therefore so are the plants which grow abundantly on their shores, such as Plymouth gentian and slender arrowhead, which are mostly confined to Plymouth and Barnstable counties.

The hike was rounded out by walking along the edges of Mill Pond to the Mill Pond landing. If you missed this walk, please join us for our next walk to Pochet Island on Saturday, November 1, 2014 from 11:00am- 3:00pm. Due to the length of this walk, hikers are encouraged to pack a lunch and bring lots of water. Hikers may also expect to get their feet a little wet when accessing the island from Nauset beach. The walk will be co-lead by Kris Ramsay, OCT Director, and Bob Prescott, Executive Director of MA Audubon Wellfleet Bay.

Directions: From Orleans center, head east on Main Street towards Monument Road (.8 miles). Continue on Beach Road by taking a slight left at the intersection of Beach Road and Barley Neck Road. Follow Beach Road for 1.5 miles until you reach the Nauset Beach parking lot. Take a right at the entrance and go to the far southern end of the parking area. Look for a white Ford Ranger and orange cones.

Posted in Blog
Scroll To Top