On April 18th, Rufin Van Bossuyt led an educational walk in the Town’s Kenrick Woods Conservation Area off Namequoit Road. This land is 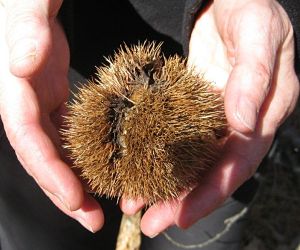 owned by the Town of Orleans and managed by the Conservation Commission. The Orleans Conservation Trust holds a Conservation Restriction over approximately 20.31acres. This conservation area is an integral part of an extensive greenbelt on the lower Cape, the largest contiguous parcel on Cape Cod for groundwater protection, and part of the watershed contributing to Areys Pond, which is a sub-embayment of Pleasant Bay.

During the walk, Rufin talked about the history of the American Chestnuts, the blight that has drastically affected the trees’ ability to survive, and what’s now being done to try and bring this once great tree population back. Rufin has studied or worked with trees most of his life, and the Orleans woods is the first place where he has seen American chestnuts reproducing in the wild.

Rufin noted “This is the only place I know of in Massachusetts with chestnuts that are blossoming and producing nuts and a few saplings,” For some reason, these chestnut trees are survivors of a blight that since 1905 has killed off the native species of prized trees that once thrived from Bangor, Maine, south to Georgia and west to Ohio.

Rufin explained that American settlers took chestnuts to plant with them as they moved west because of the tree’s rot-resistant wood, used for barns and other construction and for its nuts, a reliable source of food for wildlife, farm animals and humans. Chestnut logs were used for telegraph and utility poles in the Northeast because of the wood’s resistance to decay. Rufin mentioned that there are still two chestnut utility poles, installed 82 years ago in 1928 on Forest Street in Harwich. Usually, poles last 30 to 45 years, he said, drawing on his career withthe utility company that became National Grid.

There are a lot of American chestnuts in Massachusetts but, due to the blight, few survive to flower and produce fertile chestnut seeds for a new generation. Most are stump sprouts that die back before getting tall enough to break through the forest canopy to get the sunlight that they need to flower, he said.

Chestnuts also need pollen from another nearby chestnut to create fertile nuts that will sprout into a new tree. To help, The American Chestnut Foundation has worked to pollinate isolated chestnuts around Rhode Island and Massachusetts, including a backyard tree in Harwich and a tree near Namequoit Road in Orleans, with the help of NStar personnel and a company bucket truck.

“Everywhere I go, I’m looking for adult chestnuts,” Bossuyt said. So, if you think you have an American chestnut tree on your property please contact Kris Ramsay, OCT Administrator at 508-255-0183, who will then coordinate with Rufin to see about conducting a site visit.

Join us for our next walk on Thursday May 16th, from 9:00am-10:30am at the Ice House/Reuben’s Pond Conservation Area. The trail head is located at 245 Tonset Road, Orleans.

Directions: From the intersection of Rt. 28 and Main Street in Orleans, drive southeast on Main Street towards Nauset Beach (.4 mi), turn left on Tonset Rd at the lights and follow the road to trail head destination on right (1.4 mi). Look for a white Ford Ranger pickup.

Posted in Blog
Scroll To Top